If you see a swarm, please do not try to handle it yourself. There is no way to visually determine whether it is Africanized or not, and it is not worth getting seriously injured or injuring innocent by standers. Please call a certified professional to handle the swarm or colony.

The certified Africanized Honey Bee (AHB or “Killer Bee“) removal technicians at florida-bee-removal.com, have been removing bees, wasps, hornets, and yellow jackets from commercial & residential properties both interior and exterior on the west central coast of Florida for over 10 years.

We offer the latest, most innovative methods for removing the bees and hives from any structure. We are fully Licensed and insured to handle all of your needs. If you’re experiencing any other wildlife problems, please visit our Nuisance Wildlife Relocation, Inc. website for more details.

Call us for a humane solution to your bee problems.

Florida-Bee-Removal.com and Nuisance Wildlife Removal is dedicated to the protection of your family’s health and property. We are a family owned and operated business serving Manatee, Sarasota, Charlotte, Hillsborough, Pinellas, Polk and Lee Counties in Central Florida for more than ten years. Using the latest techniques available, we   have perfected a safe, effective and humane system of trapping and relocating   nuisance animals.

Our goal is to provide complete   satisfaction to all of our customers. We offer a full array of services. We   will investigate and identify the nuisance animal. Then we will explore the   options available with the customer to ensure the safe and humane removal and  relocation of the animal. Once the animal has been removed and relocated, we   will repair the damage it has caused. Finally, we will work with the customer  to educate on prevention, to make sure the nuisance does not come back.

Africanized honey bees are now in the state of Florida.

Here are 7  things to know about the Africanized Honey Bee. If you have the need for a licensed pest control operator in Sarasota or surrounding areas for bee removal of any kind. Call us at 1-866-263-WILD! 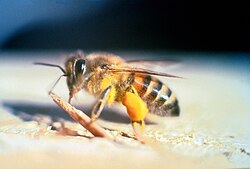 1. The insect is the result of experiments in Brazil decades ago. The bees moved from there to Arizona, New Mexico and Texas.

2. One of the worst things you can do is to disrupt one of their hives. This will cause them to become exceptionally aggressive.

3. There is more that can excite them to attack than that however. The other things that do are: smell, vibration, noise, color, or movement. 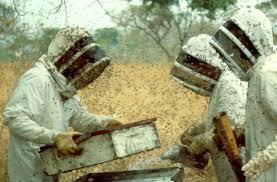 I feel SO bad for this homeowner, he made every attempt to save the bees that had taken up residency in the wall of his home.  He watched video after video and read story after story on how and what you will need to save bees and start a managed colony.  He went and bought a bee suit, a smoker, a bee box/hive kit to build, to place the colony in and you will see from the photos that this homeowner even cut his block wall to try and retrieve the bees and hive. He was able to smoke and calm most of the bees and retrieve most of the hive but unfortunately he was unable to locate and exclude the queen, which is needed for the hive to survive. So, all the bees that he had “captured”  escaped because they were not managed and “honey-robbers” (outside bees) came and started to “take-over” what was left of the hive.  Unfortunately once we arrived it was obvious that there was no queen present and there was not much of the hive left to salvage so we had to exterminate the feral bees that had taken over and then clean-out the remainder of the hive.  Once all of that was completed the homeowner could then start putting his house back together.

We are being “swarmed” with bee calls right now. With the strange weather pattern we are having it is causing the bees to swarm. We have not only had transient swarm calls but also an increased amount of bees finding areas in, on or around your home to to start a hive. The calls we have had this week have been bees that had taken over a wood pecker hole in a palm tree about 35 feet off the ground. Which would not have been such a bad thing except the palm tree was dead and was falling over almost falling onto a commercial building. The next call was a very large transient swarm that had moved between a total of 4 trees at a local public school, giving the staff great concern for the children’s safety. So if that wasn’t enough excitement we get  call from a local RV resort that several people have been stung from bees that seem to be coming / going under a shed… Well they weren’t kidding. We arrived at the park to find a very aggressive colony of bees that obviously been there for several months.  They had made a hive between the concrete slab and flooring of the shed. We were able to remove the bees and then clean-out the large hive. What a “sticky” situation that was.  So you would think that would be all the calls for bees for the week right? Not this week… A construction company called and one of the office trailers they have out at a sight has a large bee hive under the trailer and it was stated that they were getting in between the insulation and the floor. They were very concerned because there were several bees that started appearing on the interior of the trailer.  Again the bees were removed and a clean-out of the hive was done. But that was not the last “buzz” we received about bees we had several other transient swarms in trees, small swarms on the exterior of homes, and two calls where bees had started to colonize in the chimney of two different houses.

BOCA RATON, FL (BocaNewsNow.com) — Bizarre situation this afternoon outside the Publix at Clint Moore and US 441 as hundreds of bees have descended on the front entrance way.

Publix employees are helping shoppers get in and out of the store without being stung.

It is unclear what led the bees to move in. So far, fire rescue has not been called to the scene. You may want to delay shopping here, however, for at least a few hours until the bees vacate or are vacated. Bee and Wasp Season Once Again

It’s that time of year again. The weather is getting warmer and there is a definite buzzing in the air. Yes, it is bees. Honey bees, bumble bees, yellow jackets, wasps, hornets, are all on the increase. Nuisance Wildlife Removal starts to get more and more calls this time of year to remove nests and hives of stinging insects.

Those insects who have been docile and dormant all winter are spreading out, building new nests, and getting aggressive toward those who get to close.

Be careful entering your lawn shed, uncovering your grill or boat, and trimming the trees and shrubs. There may be a new nest of angry wasps where you don’t remember seeing one before.

If you run across a new bee hive of any size, call the professionals at Nuisance Wildlife removal. Our toll free number is 866-263-WILD.

Neighbors who live along Hickory Knoll Court say honey bees, yellow jackets and even bears, believed to be from nearby Wekiwa State Park, are all part of a neighborhood nuisance.

The insects are swarming around a foreclosed home in the Wekiva Glen subdivision. It’s not the buzzing that’s disturbing neighbors. Over the weekend, Jeff Rolling saw much more.”I heard what I thought was somebody breaking into my house. I got up and checked, and I realized it was three bears. One of them weighed over 450 pounds,” Rolling said. The bears had come looking for a midnight snack.” They come back every night, and they grab a little cone off the hive and leave,” Rolling said.

Rolling has been stung several times.”I was really concerned that my 7-year-old is going to be here, and it wouldn’t take very many bee stings to seriously hurt her,” Rolling said. Bears tend to come out more in Florida’s  winter months.”The bears don’t have much to eat, so that protein source from the beehive is great for them,” he said. “I’m sure they don’t mind the honey either. I’m sure that’s a bonus.” It was estimated that  nearly 50,000 bees were there before the three bears upset the whole thing. The bees and preying yellow jackets were removed.

(CNN) — Africanized honey bees have been confirmed in Georgia and are responsible for the death of a 73-year-old man, the state’s agricultural commissioner said Thursday.

Curtis Davis of Dougherty County in southwest Georgia last week accidentally disturbed a colony of bees while he was clearing bush with his bulldozer, CNN affiliate WFXL reported. He received more than 100 stings.

“This is the first record of Africanized honeybees in Georgia,” Agricultural Commissioner Tommy Irvin said in a statement about the entomological tests.

Africanized honey bees, known colloquially as “killer bees,” were believed to have entered Texas in 1990 and have since spread to about 10 other states from California to Florida.

Because of the similarity of the appearance of European honeybees and Africanized bees, the insects from the Dougherty County incident had to be tested to ascertain their identity. Irvin said they are less predictable than European honey bees.

Africanized honey bees, which are hybrids of African and European bees, can be highly defensive around their nests and swarm more frequently than other honey bees, according to the U.S. Department of Agriculture. The venom carried by honey bees has similar potency.

Irvin, who urged people to be cautious around nests, said employees will monitor and trap “bee swarms to try to find where any Africanized honey bees are.”

He stressed that European honey bees are important for the pollination of many crops.

Host Chatsworth and Lake Balboa Birmingham will resume play Wednesday after a swarm of bees camps out on a fence at the field.

You could say that the West Valley League baseball opener between Chatsworth and Lake Balboa Birmingham high schools created quite a buzz.Literally.

The game was suspended in the top of the first inning Tuesday when bees swarmed the field and eventually locked onto a chain-link fence down the third base line at Chatsworth.

Observers found it hard to BEE-lieve.

“I’ve heard of all kinds of cancellations, but never a bee-out,” Birmingham Coach Matt Mowry said. “We saw the swarm, ‘holy cow.’ We were at the mercy of the bees.”

An umpire and a Chatsworth player who are allergic to bees were the first to scatter. Players, coaches and spectators waited nearly an hour for Los Angeles Unified School District pest control to arrive.

When no one came, the teams and umpires decided to suspend the game until Wednesday at Chatsworth, when the game will resume where it left off — with two out in the top of the first inning.

“We don’t know why they showed up or why they chose that spot,” Chatsworth Athletic Director Mike Immken said of the bees.

The swarm did take a shape, though.